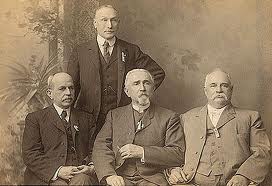 The story of how Kappa Alpha Order came into being revolves around James Ward Wood’s life and his experiences. He was indeed, the driving force and impetus that sparked life into our Order.

Even though he was from what is now West Virginia, his family was sympathetic to the Confederate cause as his family’s home was actually about fifteen miles from the newly created border. In 1861, at the age of fifteen, Wood joined a local cavalry regiment to fight with the Confederacy in the Civil War. Since he was familiar with the area, he spent most of his time patrolling the Virginia/West Virginia border on the lookout for a westward advance by the Union. Near the end of the war, he was at home on a furlough when he decided to visit an old girlfriend. Heeding the dangers that could lurk on mountain roads during war time, he stuck his cavalry pistol in his bootleg. As he mounted his horse, the pistol accidentally discharged, sending the ball ripping through his foot, severely wounding him. Tragic as this event was, it was a blessing in disguise for the future Kappa Alpha Order.

While he recuperated, he spent his time at a local country store awaiting news of the war’s end and listening to the owner of the store, a gentleman by the name of Van Arsdale, tell stories about the mysteries of freemasonry. (Freemasonry is a secret mens fraternal organization that has existed for over a thousand years. Members are known as masons and belong to various chapters called lodges.) Fascinated and captivated by Van Arsdale’s stories, Wood searched for more information about Masonic work and found books that continued to whet his appetite for the mysterious.

That fall, Wood carried this appetite for fraternity with him to Washington College. Once enrolled, he investigated the fraternities that existed on campus at the time: Beta Theta Pi, Phi Kappa Psi and Alpha Tau Omega. Not pleased, he simply decided that he would form his own secret organization.

Wood somehow managed to procure a ritual from a small fraternity, Epsilon Alpha, which had faltered during the war, and with Will Scott’s assistance, used it to write a modest ritual that satisfied both their taste and impatience. Finally, on December 21, 1865, these two men met with Stanhope Scott and Walsh and bound their friendship by “mutual pledge of faith and loyalty,” and formed Phi Kappa Chi fraternity. The name of their fraternity was probably chosen in parody of Phi Kappa Psi. Will Scott was chosen as Number I; Walsh, Number II; and Wood, Number III.

The other fraternities looked scornfully upon the appearance of a new secret society on campus, and members of Phi Kappa Psi were especially perturbed at Wood’s use of the name Phi Kappa Chi, because it was so similar to their own. Consequently, Wood was asked by a Phi Kappa Psi member to change the name, to which he obliged. The organization reemerged as the K.A. fraternity. At that time, the letters did not stand for Kappa Alpha. It is believed that Wood used the letters “K.A.” to attract members and attention. (The popular old K.A. fraternity “Kuklos Adelphon,” that was founded in 1812 and that had died during the war, was still commonly known.) By the end of the spring 1866 semester, the four founders had initiated seven additional members.

The new school year brought promise. Due to Lee’s association with the college, the enrollment more than doubled to nearly 400 students. The K.A.’s, who held many of their meetings at the Ann Smith Academy for girls, where the Scott brothers’ father was headmaster, initiated seven more men into their fold that fall. Among these was Samuel Zenas Ammen. Standing 5’6″, Ammen was immaculate and precise in his manner. Will Scott, who began the tradition of bestowing nicknames, dubbed him “Lord.”

Before attending Washington College, Ammen had become a Master Mason; so to him, Wood’s modest ritual was “mere verbal pyrotechnics in florid sophomoric style with nothing to touch the imagination of initiates nor stir their fancy.” Inspired by its possibilities, however, he urged the young fraternity to amend and enhance the ritual.

In Wood’s room at Sunnyside, an estate on the edge of town, Ammen and Wood discussed possibilities for a new ritual, and it was agreed that Ammen should continue the work. In order to gather material, he read books, watched the chapter’s activities, listened to their ideals and beliefs and conferred with Wood and Will Scott late into the night on many occasions. Little by little, the old ritual was chiseled away, and the new one was constructed in its place. Nearly two decades later, Will Scott would write to Ammen, “The ritual was all so altered, changed and improved upon, mainly by you, that we can say it underwent a complete regeneration, or new birth.” His development of the ritual, constitution, bylaws, grip and symbols and his enduring commitment, ultimately earned Ammen the title of Practical Founder of Kappa Alpha Order.

Ammen later insisted, “The present ritual, in fact, was not made, it grew.” However, the new ritual transformed the K.A. fraternity into Kappa Alpha Order, an order of Christian knights pledged to the highest ideals of character and achievement. Ammen and his contemporaries sought to preserve the masculine virtues of chivalry, respect for others, honor and reverence for God and woman. Thus, they emulated their college’s president – Robert E. Lee. Ammen would later recall, “We likened him to Agamemnon and we were his Achoi battling on the fields of Troy.”

Despite the milestone of establishing its refined identity on campus, the brothers of Kappa Alpha stood at a crossroads. The chapter had recently expelled five members for violations of their obligations and Will Scott was preparing to leave his position as Number I. The brothers had to decide whether or not to keep up the fight. One moonlit night in May 1867, Ammen and a recent initiate, Jo Lane Stern, took a walk to discuss the future of their young fraternity. As they sat on the steps of Whites General Store, on the corner of Lexington’s Main and Nelson Streets, they contemplated the viability of Kappa Alpha Order and whether or not the chapter could survive. “Shall we let the lodge die,” they asked. Ammen later recalled, “The outcome was a decision to keep up the fight, and from that time on our prospects improved.”

With the fortitude to forge ahead, the chapter began the 1867-1868 school year with Ammen as the new Number I. They began looking beyond Washington College to establish KA’s second chapter; their first prospect was naturally the school’s neighbor, VMI An invitation for membership was extended to John Eliphalet Hollingsworth, a VMI cadet, and by Spring 1868, three more cadets were initiated. Subsequently, Beta chapter was formed March 8, 1868.

Transfers from Washington College established chapters at the University of Georgia (Gamma) in 1868 and at Wofford College (Delta) in Spartanburg, S.C., in 1869. Epsilon was also established in 1869 at Emory University in Atlanta by members of Gamma. One account of early expansion efforts tells of Stern’s claim that Lee permitted him to miss class and travel to Ashland, Va. in 1869 to found Zeta at Randolph-Macon College. Although Lee was known for only permitting absences because of illness, legend has it that he approved Stern’s journey to Randolph-Macon and then again to Richmond College in 1870.

Stern stated that he arrived in Richmond amid little enthusiasm for fraternities, but that he brought with him a letter of introduction from Lee to J.L.M. Curry, an influential law professor, that explained his mission. Allegedly, Curry called a faculty meeting and announced, “If General Lee will let a man come away to establish a chapter, I vote for it. If he thinks a fraternity is a good thing, I think so too” hence, Eta was born. Theta (prime) was also established in 1870 at Atlanta’s Oglethorpe University by members of Gamma and Epsilon chapters. By the close of 1870, five years after KA’s founding, the Order’s ranks had grown to eight chapter.

As Kappa Alpha continued to grow, The Order expanded deeper into the South, the North and to the West Coast. By the turn of the century, the number of active chapters had increased to 44. In 1891, the Convention established guidelines for organizing alumni chapters. The main distinction in alumni chapters was simply that they could not initiate new members. By 1933 there were 72 undergraduate chapters, and delegates to the 38th Convention in 1935 adopted a new constitution and governmental structure to organize the ever growing fraternity.

As a part of the reorganization, the first National Administrative Office was opened in New Orleans in 1934. After a short time in New Orleans, it relocated to Atlanta and then Louisville. The national office returned to Atlanta in 1954, where it would stay for the next 32 years. In 1986, the National Administrative Office finally moved back to Lexington, Virginia where it is still present to this day.