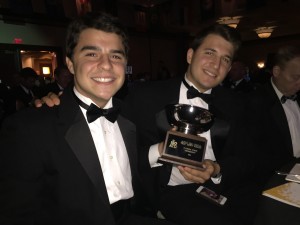 David Butter and Alec Werner with the 2015 True Merit Bowl

The Epsilon Sigma Chapter of Alpha Tau Omega National Fraternity at Florida State University received the 2015 True Merit Award during the 150th Celebration Awards Banquet on August 8, 2015, in Indianapolis, Indiana. This is the fifth time in history Epsilon Sigma has won one of the highest awards ATO can bestow on a chapter.

Chapter President David Butter accepted the award in front of the crowd of more than 500. Click the video link to view Butter’s True Merit acceptance speech.

“Because of Florida State’s proven success as a chapter, individual members enjoy a strong ATO experience that enhances their college education and makes them more valuable as citizens, currently on their campus, but very soon, as members of their respective communities,” said National Fraternity Chief Executive Officer Wynn Smiley.

The True Merit Award emphasizes commitment to the mission of ATO, including positive community and campus involvement. The Epsilon Sigma Chapter also excelled in the following chapter operations: Recruitment, Elevate (community service hours) and Impact (dollars raised). The chapter’s Board of Trustees was also recognized with the Fraternity’s Upper Alpha Award for outstanding service to the chapter.

“Leading a fraternity chapter is not easy,” said Smiley. “Florida State has demonstrated why it is respected and why the brothers have every reason to be proud.”